A short report on the second game with the Republican /Polybian Roman Army.

My Romans (commanded by Nichol Murray and myself) Vs John Glass's Numidian army,. We were using the 'To the Strongest' rules and 165 points a side this time

John started the game in the same fashion as the last game by moving his army quickly across the table, he was able to field 5 elephants. A rather splendid, if not frightening sight, as they closed on my Roman command.

Nichol managed to break through on the Roman left flank and threatened to take John's camps at one point. The centre of the Battle turned into a real slugging match as the elephants fought the Roman Formations.

I fielded  a new unit of Italian allied javelin troops to protect my right flank and although they didn't do much, they held up the Numidian Cavalry attacking on that side.

The game came down to two or three coins left in each army but a Roman flank attack forced an Elephant to rampage and that was enough to give the Romans the game.

Another fantastic game with the guys and great fun to play these rules at the club. We look forward to the next one.

Some images of the game.. 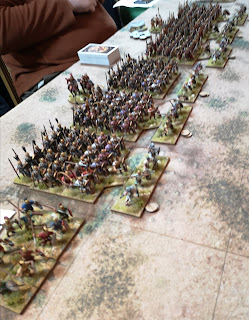 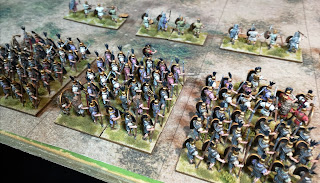 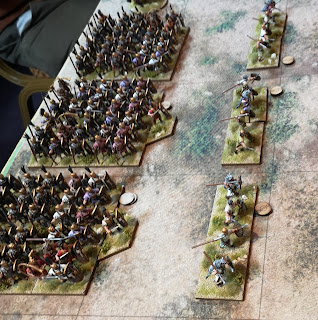 This is excellent!It looks very epic!

This is excellent!It looks very epic!

Lovely armies. Those elephants are so impressive; gosh!
Regards, James