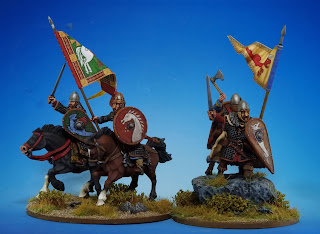 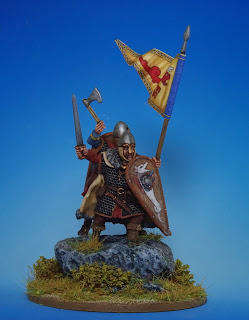 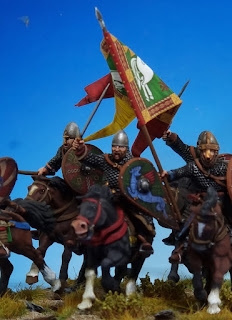 Finished a foot Warlord for my Saxon 'Saga' Warband.
Figures are 'Victrix miniatures' with 'Little Big Man Studios' transfers.
I have been enjoying some Saga games recently. The system has really captured my imagination, I guess it helps that a lot of my gaming group friends are also into it. This also helps to get things painted up, as I'm adding models between each game.
I must admit to going a little overboard and buying a few of the supplements. Age of Hannibal and Age of Invasions being a couple. The books are beautifully laid out and great pictures throughout to inspire.
It has been a tough learning curve building up my Anglo Saxon army and learning to get the most out of the battle board. I have been able to paint up more models to give me some options in games. I have no doubt that my army will change again but at present I field..
Warlord: Mounted or on foot option.
8 x Hearthguard: Mounded (2 points).
12 x Levy Archers (1 point).
12 x Levey Spear (1 point).
8 x Warriors (1 point).
8 x Warriors (1 point).
A 6 point army with the 8 Hearthguard unit as my heavy hitters.
The abilities on the board suit large units and I have had advice to turn a Warriors unit into another Levy unit but I kinda like the way the army plays just now!
Having lots of games, losing lots, but winning a few here and there. As I get to know my army and battle board, every game is a new lesson and im getting better or tougher to beat :) !
(I must stop charging with in my warlord).
Next game is on Thursday against another Saxon army and an experienced player. No doubt I'll be rethinking my tactics on Friday but that's half the fun!
Here is the warband so far. 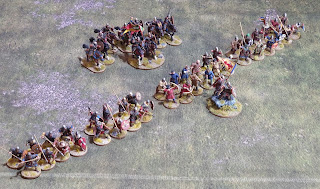 That's my Saga ramblings. I use this blog more of a gallery for my projects to keep me motivated, but I'll keep updating on the exploits of the Saxon army.  Loving the games and collecting the figures.
Posted by saxon dog

Email ThisBlogThis!Share to TwitterShare to FacebookShare to Pinterest
Labels: Saga Age of Vikings

Looks like a useful little warband - I dont know Saga at all but if you are getting plenty of games in and having fun, thats the main thing!

Always a joy to see your figures and hear about your games.
I'm curious to see you have chosen to do two different leaders rather than the same commander on foot and mounted. Is this because you prefer painting something different rather than repeat a design or was there another thought process?
all the best
Stephen

Thanks guys.
Stephen, just an option for the warlord to fight mounted or on foot.

Ross, yes having great games and lots of laughs with these rules.

Imho an Anglo Saxon force are all about the defensive infantry grind. I'd drop the mounted troops and mounted Warlord and even the Hearthguard. I'd make your units as large as you can that being buying 3 warrior units and dividing them into 2 12 man warrior units and the rest levy. For example.

this would convert to on the table to:

I hope this helps. Enjoy your games of SAGA!

Christopher, thank you. As I said in the blog, I'm kinda happy with the way the army is gaming the now and may change it in future. My warriors can morph into Levy units when I need them.

Excellent. Love to see it. I just got my 2nd edition books last week. Somehow I hadn't heard about the free-shipping tier at Gripping Beast but managed to get in just before it ended.

I'm adding some Levy to my Anglo Dane warband soon.