Wars of the Roses the Percy Neville feud

Here is a short write up of a "Lion Rampant" game that I have been making a scenario for.
Lion Rampant is a set of rules published by Osprey Publishing and written by Dan Mersey.
You will need to buy the rules to play this scenario.
The idea for the game 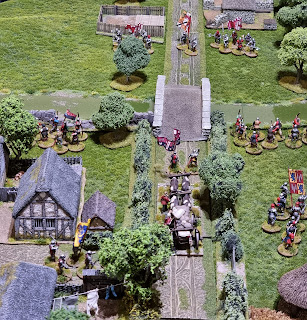 Percy and Neville feud.  “Ambush at the bridge near Staemsford”
The Percy and Neville feud was a series of raids and skirmishes between two prominent northern English families and their followers that helped spark the Wars of the Roses.
Beginnings
No one really knows what caused the start of the feud but the first outbreaks of violence were in the 1450s prior to the Wars of the Roses. Theses families would later meet in battle several times during the war. 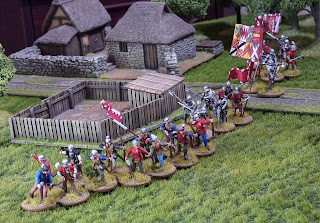 The Forces
The Percy Forces:
Percy Earl of Northumberland and his retinue

•       1 x Wagon that defends as a unit of 12 Yeomen. This Wagon can not attack only defend. It has the strength, defense value and armour of a unit of Yeomen.

The Neville/Warwicks Forces:
Neville (Warwick the King Maker) with his retinue.

Warwick/The Nevilles in this game

You will have a detached leader (Lord) and his standard bearer that are grouped together. They must remain within 1” of each other at all times. They have a strength and stats of a 6 figure MAA unit with the special Ferocious/Fearsome rule. For this scenario they can not be mounted. They fight and take casualties the same as a MAA unit. Every time they take a strength/ casualty the player rolls 2 d6 on snake eyes, the leader is killed and every unit in his warband takes a courage test. The leader is the last casualty/strength point to die.

They give a +1 to morale for any friendly unit within 12”. In this scenario they cannot attach to a friendly unit.

If the leader is within one inch of a friendly unit then that unit can re roll a single failed activation test this turn. You can play around with this and make the distance 6 or 12 inches. I wanted the leaders to stay close to units as its a small table 4 by 5. 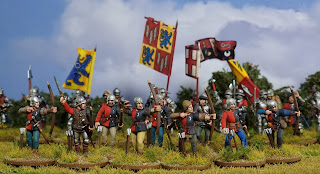 The Neville side mark out on paper what troops are at each deployment marker and exactly where the 2 deployment markers are to be placed on the table. They must be at least 18 inches from the bridge, and units must be deployed within 12 inches of the marker.

The Percy Side must mark out his line of march and where his troops are in the column of march, the wagon must be in the centre of the column.

As soon as the wagon reaches the bridge in the middle of the table the ambush is sprung.

Percy objective is to get the convoy off a table edge. Neville objective capture the wagon. 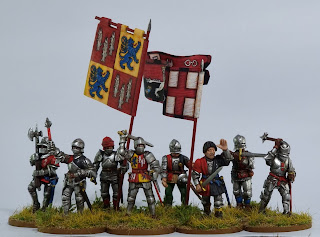 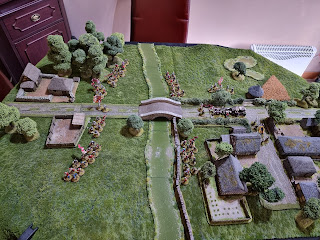 How the wagon moves and defends.
At the beginning of the Percy turn the player roles a D6 to see how far the wagon moves this turn. 1 inch for each pip rolled. If the wagon has taken casualties then deduct 1 from the dice roll.
The wagon can't attack an enemy but it can defend and has the Armour value as a unit of Yeomen if charged. First time I played this I didn't have the defense value but just the random movement element. I think allowing the wagon to be targeted or charged helped the game play.

The game starts with the wagon arriving at the bridge. I just start the game at this point.

Here is the hand out I made for the players to read before the game. 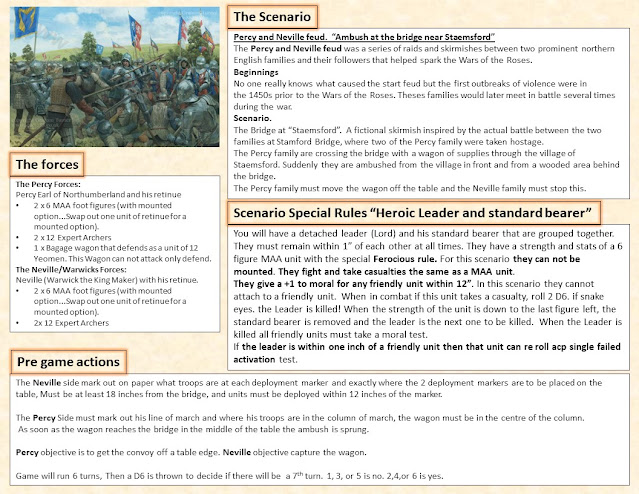 The unit cards I used were modified versions of the ones kindly shared for personal use by Ken Altfather.
https://drive.google.com/file/d/1irnk_HI8a8cHnhtCGuM2fWbdbnO4KRRG/view
Ian Carter and Nichol Murray played this scenario yesterday. Nichol as the Percy family and managed to get the wagon off the table. Here are some images of that game. 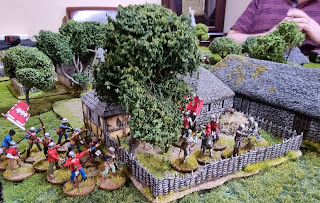 Ian's second deployment marker had a unit of archers and MAA hidden in the village behind the bridge. His other troops were deployed in the woods in front of the bridge. 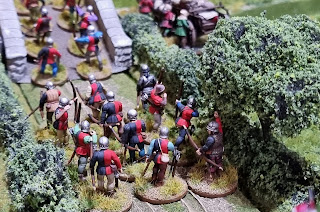 The Percy troops crossing the bridge.
We agreed to do a 5 game campaign, next game is a siege game with the Percy's making it home to their castle.
Posted by saxon dog

Email ThisBlogThis!Share to TwitterShare to FacebookShare to Pinterest
Labels: Wars of the Roses

Lovely looking game, I’ll come back some time and try the scenario 👍

Beautiful table and figures on display here....good luck with your campaign.